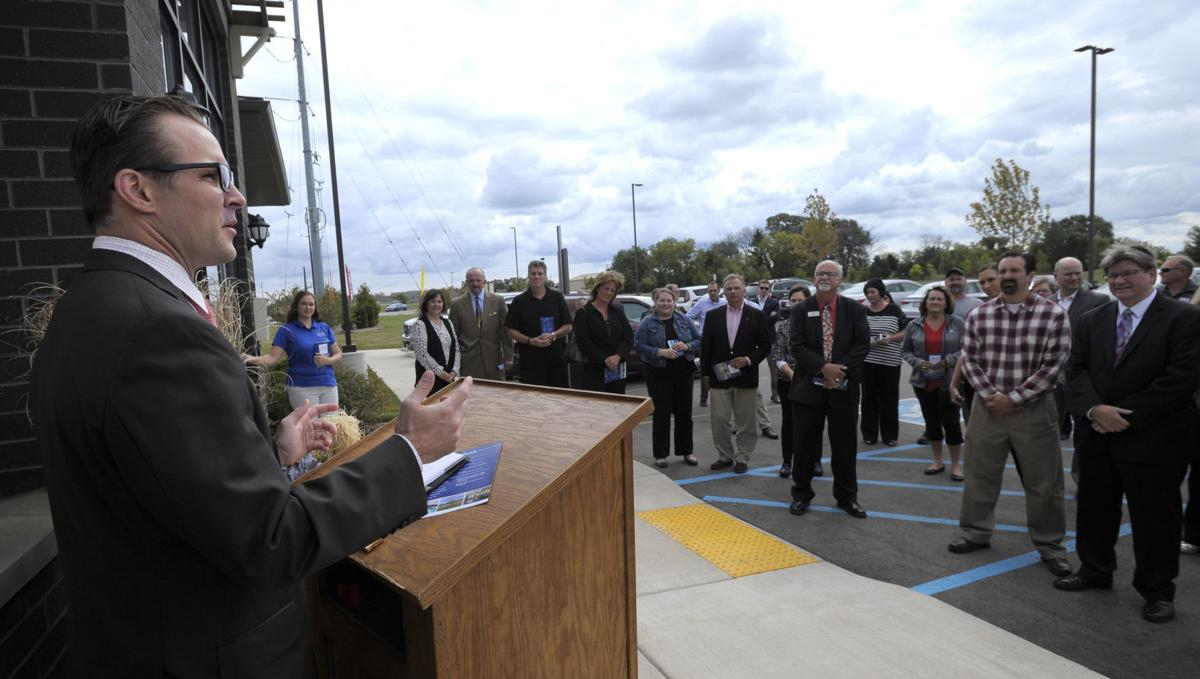 “We’re on the map! Our name is starting to get out,” he exclaimed.

Peters, who moved to Kenosha County in 2017 and replaced the retiring William Morris in January, has seen the village grow and grow.

Economic development is alive and well in this village and town of nearly 8,500. In recent years, a sizable number of lots have been filled, with developers constructing commercial and residential units.

Retail growth has come in a big way with a number of new businesses coming up along Green Bay Road. The stores and service companies are there to complement Walmart and Sam’s Club.

“Village president George Stoner has been aggressive in getting development there,” said Lou Molitor, Kenosha Chamber of Commerce president and chief executive officer.

Stoner attributes much of the commercial development to the new housing, such as the Market Square Apartments, 3100 Market Lane.

And the Market Square Apartments, developed by S.R. Mills, chief executive officer of the Bear Real Estate Group, seem to be a stabilizer that have helped to bring on new development. The apartments have a 90% occupancy rate.

The 330-unit complex was first proposed in 2014. Mills suggested the timing was right because of the influx of new jobs predicted because of industrial development and expansion along Interstate 94.

He also said the development is a good fit because of a shortage of rental units in the area. He said he believes the market is going to continue to improve.

Since creating that development, Mills has been extremely busy.

Bear is developing an 80-unit independent living senior housing project near Carthage College. The $10 million to $15 million Carthage View development is located at 2101 and 2207 Sheridan Road.

Also in Somers, along Green Bay Road near the University of Wisconsin-Parkside, the $30 million, 241-unit Hawthorn Apartments development is under construction. Developed by Moyer Properties at the corner of Highways 31 and E, the development is scheduled for completion in February 2021.

“We chose Somers as a result of years of monitoring the Kenosha/Racine market,” Greg Moyer said.

He partnered with Varin Legacy, a property management company, that is operated by David Nankin and his associates who developed the Apartments at Library Park.

Considered a luxury apartment development with European-style features, Hawthorn includes a clubhouse featuring a bicycle repair workshop, media and party room, co-working space, entertainment and social lounge and more. Moyer said it would appeal to a broad range of tenants.

“We expect tenants from Racine, Kenosha and Lake County, Ill.,” he said. “Job expansion on the state line up to Milwaukee has been solid, and new construction of apartments has been limited in this expansion. We expect to rent to empty nesters, renters by choice, current renters looking for new and upgraded units and new Kenosha residents.”

Developed in phases, Moyer said the first tenants will be moving in by May 2020.

While all this development is changing Somers, with commercial and multi-family bringing in people to live and shop, Peters believes there still is a need for more single-family housing.

Peters said some developers might find more value and a better return in doing multi-family housing partly because of cost.

“The shortage of trade people is driving up some of the cost,” he said.

Somers has taken to trying a little recruiting. “We’re growing and want to continue,” he said.