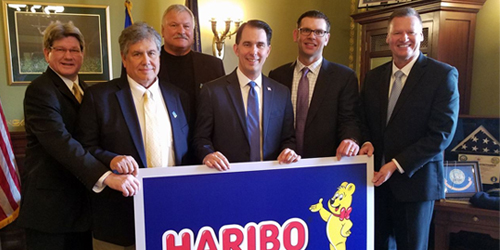 The Wisconsin Economic Development Corporation (WEDC) today announced that an incentive agreement has been reached between the state and HARIBO that formalizes the company’s plans to establish a manufacturing complex in Wisconsin.

The Germany-based confectionary company and maker of the popular “GOLDBEAR” gummy candies has selected Pleasant Prairie as the site of its first manufacturing facility in North America. The 500,000-square-foot facility is expected to employ about 400 workers.

“Wisconsin is open for business and prominent companies from across the world are paying attention,” said Governor Scott Walker. “HARIBO’s decision to locate right here in Wisconsin as its first manufacturing facility in North America is further evidence that our reforms are working and will help provide hundreds of family-supporting jobs in Wisconsin.”

“Having a global company like HARIBO establish operations here will have a significant economic impact on Kenosha County, southeastern Wisconsin and the entire state,” said Mark R. Hogan, secretary and CEO of WEDC, the state’s lead economic development organization. “This is another example of how Wisconsin is attracting companies from around the world because of our business-friendly climate, dedicated workforce, world-class education system and reliable infrastructure.”

WEDC is supporting the project by awarding HARIBO with up to $21 million in performance-based state income tax credits through 2028. The company can earn the tax credits based upon the number of jobs created; the amount of capital investment it makes; the amount it spends on purchasing equipment, goods and services from Wisconsin companies; and the amount to be spent on employee training.

In addition to the 385 jobs expected to be created by HARIBO in Pleasant Prairie, an economic modeling study estimates the expansion could indirectly generate 381 additional permanent jobs in the region. Those 766 new jobs could generate up to $8.4 million in state income tax revenue over a five-year period.

HARIBO is in negotiations with the village of Pleasant Prairie to secure the property near I-94 for the new facility.

Read the entire story at InWisconsin.com.