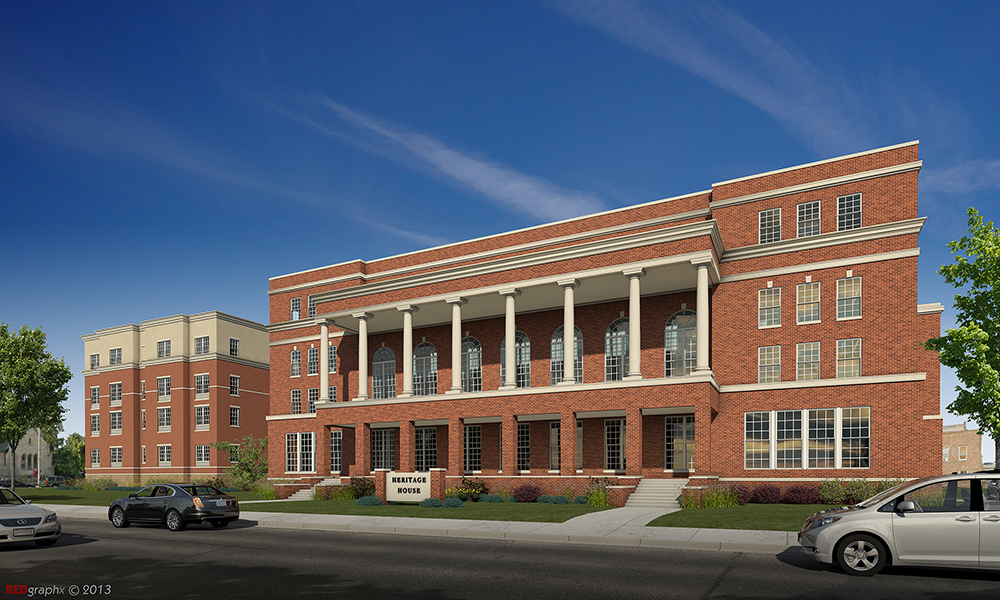 The City of Kenosha has received a $250,000 state grant to support the redevelopment of the Heritage House building into an 80-room downtown hotel.

The Community Development Investment Grant from the Wisconsin Economic Development Corporation (WEDC) will help fund plans to restore and upgrade the century-old building into a four-story, 80-room boutique hotel called The Stella.

“The State of Wisconsin is pleased to support this project, which will ensure the preservation of a historic downtown building while at the same time provide an economic boost to Kenosha’s business district,” said Lt. Governor Rebecca Kleefisch, who joined city and community leaders in announcing the grant Monday. “This project has been a real community effort involving the city and its residents, the county and the private sector, and I look forward to seeing the hotel become one of the jewels of downtown.”

“The Heritage House was an integral part of the Kenosha community for decades,” said Kenosha Mayor John Antaramian. “The city is grateful for the efforts of all of the groups who contributed to re-inventing this historic landmark as a boutique hotel. The Stella is a welcome addition as we continue efforts to revitalize downtown Kenosha.”

“Gorman & Company is excited to partner with the city and the Kenosha Area Business Alliance (KABA) to restore this beautiful historic building and be a part of Kenosha’s downtown revitalization and growth,” said Ted Matkom, Wisconsin Market President for Gorman & Company, the developer on the project.

The $26 million project calls for the renovation of the old Kenosha Elks Club building known as the Heritage House. The building was constructed in 1917, and was owned and operated by the Elks until the 1990s. It then had several owners and has been vacant for more than a decade.

Gorman is restoring the existing building at 5706 8th Ave. and is constructing a new four-story addition. The existing building will house 12 suites with a separate living area that will have views of downtown and Lake Michigan. The addition will house 68 guest rooms with high-grade finishes and state-of-the-art technology. Once complete, The Stella will have about 68,000 square feet of hotel rooms and amenities.

Construction on the hotel is expected to begin in August and be completed by December 2018. Once completed, the project is expected to create about 75 jobs and add about $10 million to the city’s tax base.
In addition to removing a blighted building from downtown, the project also is expected to help draw more visitors downtown, which will provide a boost for surrounding businesses.
The WEDC funding is a matching grant that will be used to help offset site preparation costs. WEDC also awarded the developer $2.2 million in state historic tax credits in 2016. The City of Kenosha is supporting the project with $3 million in tax incremental financing funds and KABA is providing a $1.25 million loan.

“We are really excited for Gorman & Company’s investment in this project in downtown Kenosha,” said KABA President Todd Battle. “It represents a significant investment and involves the rehabilitation and preservation of a historic structure. It also fills a need for additional downtown event space and creates a unique lodging option for business travelers and visitors. The project has created a buzz and it is great to see all of the recent investment and development activity downtown.”

WEDC’s Community Development Investment Grant Program supports community development and redevelopment efforts, primarily in downtown areas. Awards are based on the ability of applicants to demonstrate the impact of the proposed project, including public and private partnership development, financial need, and use of sustainable downtown development practices.
Since the program’s inception in 2013, WEDC has awarded more than $17 million in Community Development Investment Grants for projects expected to generate more than $233 million in capital investments statewide.

“One of the top priorities of WEDC is to support communities as they invest in revitalizing their downtowns, and this project is a prime example of how we are accomplishing that in every region of the state,” said Mark R. Hogan, secretary and CEO of WEDC, the state’s lead economic development organization. “I commend the city and the developer for taking the steps needed to rehabilitate this blighted building while at the same time maintaining its historic character.”